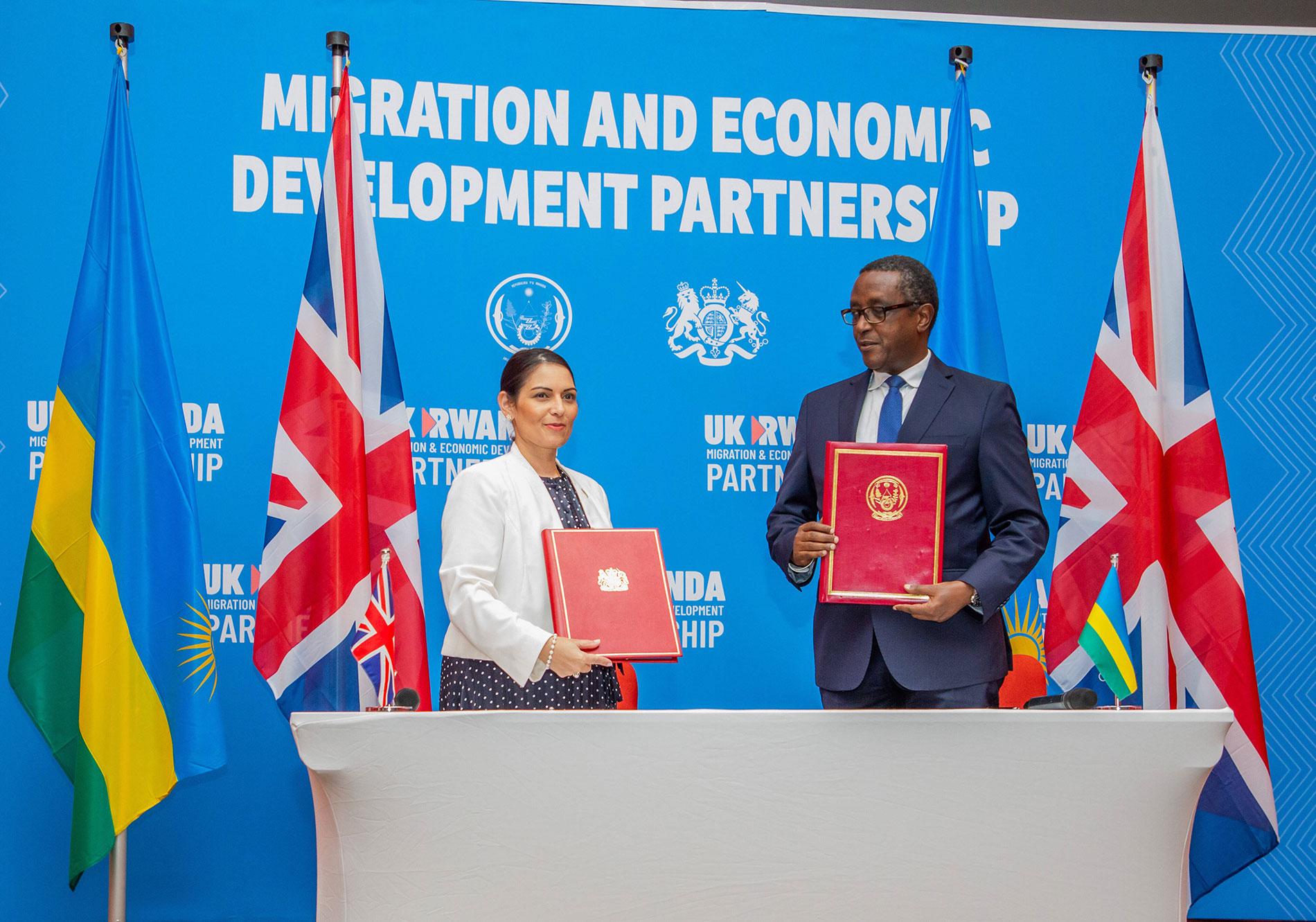 The UK’s High Court has ruled in favor of the Conservative government’s plan to deport assylm seekers to Rwanda. The ruling was handed down on Monday 19 December 2022. The court found that the plan was not in violation of Britain’s legal obligations under domestic legislation and the United Nations Refugee Convention.

The legal battle is on. Despite the European Court of Human Rights (ECHR) ruling on 15 June which halted the deportation of asylum seekers to Rwanda, the UK is still fighting to implement Boris Johnson’s flagship immigration policy. The UK will likely challenge the ECHR’s ruling in order to make good on its promise to send thousands of asylum seekers back to Africa.

This new immigration policy is the UK’s answer to persistent illegal border crossings. The UK inked a 120 million pounds deal with Rwanda that is intended to relocate asylum seekers who have managed to make their way into the UK from Rwanda. While the backlash was almost immediate, the first asylum seekers who arrived illegally since the deal has gone through have already received their “notices of intent”. This notice informs them that they will be relocated and have between 7 and 14 days to file objections.

Immigration has consistently been named the major issue facing the UK. Brexit was a case in point with immigration playing a big role in the outcome of the referendum. Around one third of Brexiteers voted for ‘yes’ because it “offered the best chance for the UK to regain control over immigration and its own borders.” In fact, “take back control” of the border was the key pledge made by Boris Johnson to Brexit supporters. To be fair, there are good reasons to be concerned about illegal migration: the number of people crossing the channel has been growing, and it is estimated that around 9000 asylum seekers have crossed the Channel this year to date – nearly three times the amount of crossing compared to the same time period in 2021.

Questions remain: Does the proposed end justifies the means? Can/should a developed western nation deport asylum seekers back to Africa without due process? Why are some refugees welcome (take the example of Ukraine), while others are not? Non western media have labelled this policy as racist. Do they have a point? How will the UK government react to the new ruling of the ECHR?

In July 2021, the Nationality and Borders Bill was introduced in the House of Commons. The law proposed a new plan for immigration. It introduced a two-tier system which gives those who arrive in the UK illegally less protection and support. The bill also increased standards of proof for establishing refugee status, removed stages of appeal, fast-tracked certain cases, and introduced penalties for late submission of evidence. The most significant change is that migrants may be deported to third countries where their paperwork will be processed. This rule enables deportations before deciding on individual applications.

The UK concluded the Memorandum of Understanding (MoU) with Rwanda on 14 April 2022 including an initial investment of 120 million pounds (150 million euros). Boris Johnson’s announcement that tens of thousands of asylum seekers, presently in the UK, would be ‘escorted’ to Rwanda to have their paperwork processed, was met with harsh criticism.

This new policy applies mainly to those who cross the English Channel illegally. At first there were reports that the measures would only affect males, but gender equality rules have widened the scope to cover all female Channel migrants and their children. They too will be ‘granted’ a one-way ticket to Rwanda. Only unaccompanied minor children entering the UK will be spared the 4000 mile trip to Africa.

“We believe our ground-breaking, long-term partnership can set a new international standard for addressing illegal migration and asylum system abuse while offering migrants an opportunity to build prosperous lives in safety,” said Priti Patel and Vincent Burita, Minister of Foreign Affairs of Rwanda. Will this system cut into the business model of organised gangs of human traffickers or merely encourage migrants to stay home?

Home Secretary Priti Patel has admitted that the plan will take time to implement because of legal challenges from charities, civil service unions, and lawyers. These groups argue that the law breaches the UN Convention on Refugees and other human rights laws. The government is now also facing harsh criticism from Labour over the £500,000 cost of the failed flight after the ECHR ruling. “We will not be deterred” Ms. Patel stated. “Our legal team are reviewing every decision made on this flight and preparation for the next flight begins now.”

Johnson’s government is clinging to the immigration policy. “We also know there will be continued opposition from politicians, the media, and in the courts. These voices will offer no workable alternative plans, but rather perversely act as cheerleaders for the evil people smugglers. Alas, we will even hear bigoted and ignorant claims about Rwanda,” said Priti Patel and Vincent Burita in their joint message.

Patel and Burita argue the intention of the deal is to deter people from undertaking the risky and potentially lethal journey, to crackdown on organized crime, and, to try to fix the broken global asylum system. The UK government has called the MoU a world-leading Migration and Economic Development Partnership, in which people who come to the UK illegally can be considered for relocation to Rwanda where they are “thriving happily, some of them starting highly successful businesses.”

While some are arguing the Act does not authorize policies or decisions which do not comply with the United Kingdom’s obligations under the 1951 Refugee Convention and the 1967 Protocol relating to the Status of Refugees, others, like the Law Society of England and Whales, have brought their concerns to the United Nations – arguing that the reforms threaten the rule of law as well as reduce accountability of government and access to justice. The Law Society of England is not alone: the UNHCR urged both the UK and Rwanda to re-think the scheme.

More than 160 campaign groups signed an open letter to the Prime Minister and Home Secretary demanding they scrap it. “Sending people seeking asylum to Rwanda will cause immense suffering, with the most vulnerable people bearing the brunt,” the message reads. “This is a shamefully cruel way to treat people who have come to the UK to seek protection, fleeing persecution or conflict.”

It is unknown whether any camp in Rwanda will be under UK jurisdiction or how the UK will ensure the welfare of asylum seekers. In 2015, International Refugee Rights Initiative published a report claiming that asylum seekers to Rwanda from Israel did not receive any legal status and were left with no valid documents upon arrival. Furthermore, according to a 2020 Human Rights Watch report, detainees in Rwanda suffered from arbitrary detention, torture, and mistreatment in official, and unofficial facilities. Just months before the deal was signed, UK Ambassador Rita French expressed deep regret that Rwanda was not conducting “transparent, credible, and independent investigations into allegations of human rights violations including those held in government transit centres.”

While much remains uncertain about the implementation of the deal aimed at relocating asylum seekers to Rwanda, many legal challenges remain. The decision by the European Court of Human Rights will likely not halt the policy, as the Johnson government is set to legally challenge this ruling.

After the ruling Yolande Makolo, a spokesperson for the Rwandan government, told Agence France-Presse: “We are not deterred by these developments. Rwanda remains fully committed to making this partnership work”. Critics fear that if this policy is implemented as planned it may serve as an example for other European countries to reverse the flow ‘Out of Africa’.