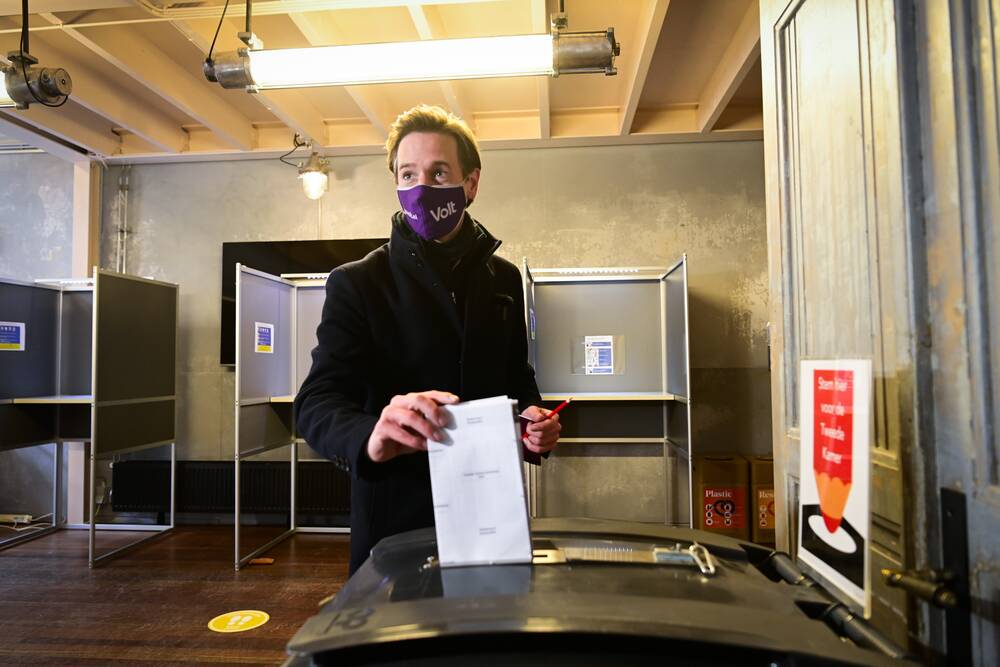 Why Volt Won In The Netherlands, A Lesson For Changemakers

Pan-European party Volt has made its first breakthrough on a national level winning 3 seats in the Dutch general election, presenting an example of how the party can emerge from the political margins elsewhere in Europe.

On March 17, 2021, something changed in the political landscape of the EU. For the first time ever, Volt, a transnational political party, won its first seats in a European national legislature. In the Netherlands, its ideological cradle, Volt won 2.4% of the national vote, earning three seats in the 150-seat Dutch legislature. While 2.4% may seem insignificant, in a country where the dominating party wins with ‘only’ 22% of the vote and coalition governments are the rule, three seats may be all one needs to make a real difference.

VOLT Europa, as the pan-European party is officially called, has had a rough electoral history since its founding in 2017. With its EU-wide party platform that is tailored for local branches, it struggled to shake the status of a one-issue party focused on Euro-Federalism. Indeed, during the 2018 Belgian local elections, Volt earned a paltry 1.5% in Etterbeek, the municipal district of the EU bureaucracy. If Volt cannot win in the very heart of the EU, then where can they win? Even in the poorly attended EU parliamentary elections of 2019, Volt managed only a single seat, thanks to a meager 0.67% of the German vote. So, for the Dutch general elections of 2021, they needed to change the game to avoid being yet another idealist/radical niche party.

Cut the wild and go mild!

Volt supporters heavily skew young and highly educated. So, it has been hard for Volt to shake the image of a student’s protest or activist youth wing. Enter Laurens Dassen, a charismatic 35-year-old banker who hails from a rural town near the Belgian border. In a campaign where physical outreach was a health hazard, media was everything. Dassen was able to flip the purveying view of Volt by portraying himself not as an outraged college activist angry with the dumb adults, but as a mild-mannered, well-spoken, and keenly intelligent person. Packaging his pro-EU agenda as a common-sense solution to the nation’s issues, Dassen was able to bring in voters by adding an air of seriousness and legitimacy to strongly progressive policies.

Euro-Federalism is in the eyes of most Europeans a pipe dream at best and Armageddon at worst. So, rather than going hard on more EU, during the run-up to the election Volt strategically targeted several wedge issues within established progressive parties, with the show horse being a full-throated endorsement of nuclear energy. Rather than Euro-Federalism, the nuclear energy stance took center stage in the Volt campaign, and it gave the party a sense of progressive realism among the Dutch electorate. Volt’s key thesis: If mainstream progressive parties think we can reach Paris without nuclear, then who are the idealists and who are the realists?

Act big to be big

The Covid-19 lockdown provided something of a level playing field for the various political campaigns, and Volt made smart use out of this by sending its tech-savvy party supporters online to spread the word. On youth-heavy social media platforms, Volt punched above its weight simply by being as, if not more present, than the established parties. It set Volt up as a real contender with broad support. This momentum only increased as polls leading up to the election showed Volt gaining at least one seat, resulting in both media and voters taking the time to listen to what Volt had to say. Taking three seats in the end, Volt now has a solid foundation for a future in the Dutch parliament.

Volt is still an incredibly ambitious project and in countries other than the Netherlands, small parties like Volt simply do not contend at all. Still, if Volt Europa aims to be a real force in European politics, it should look at its Dutch branch for a better roadmap.