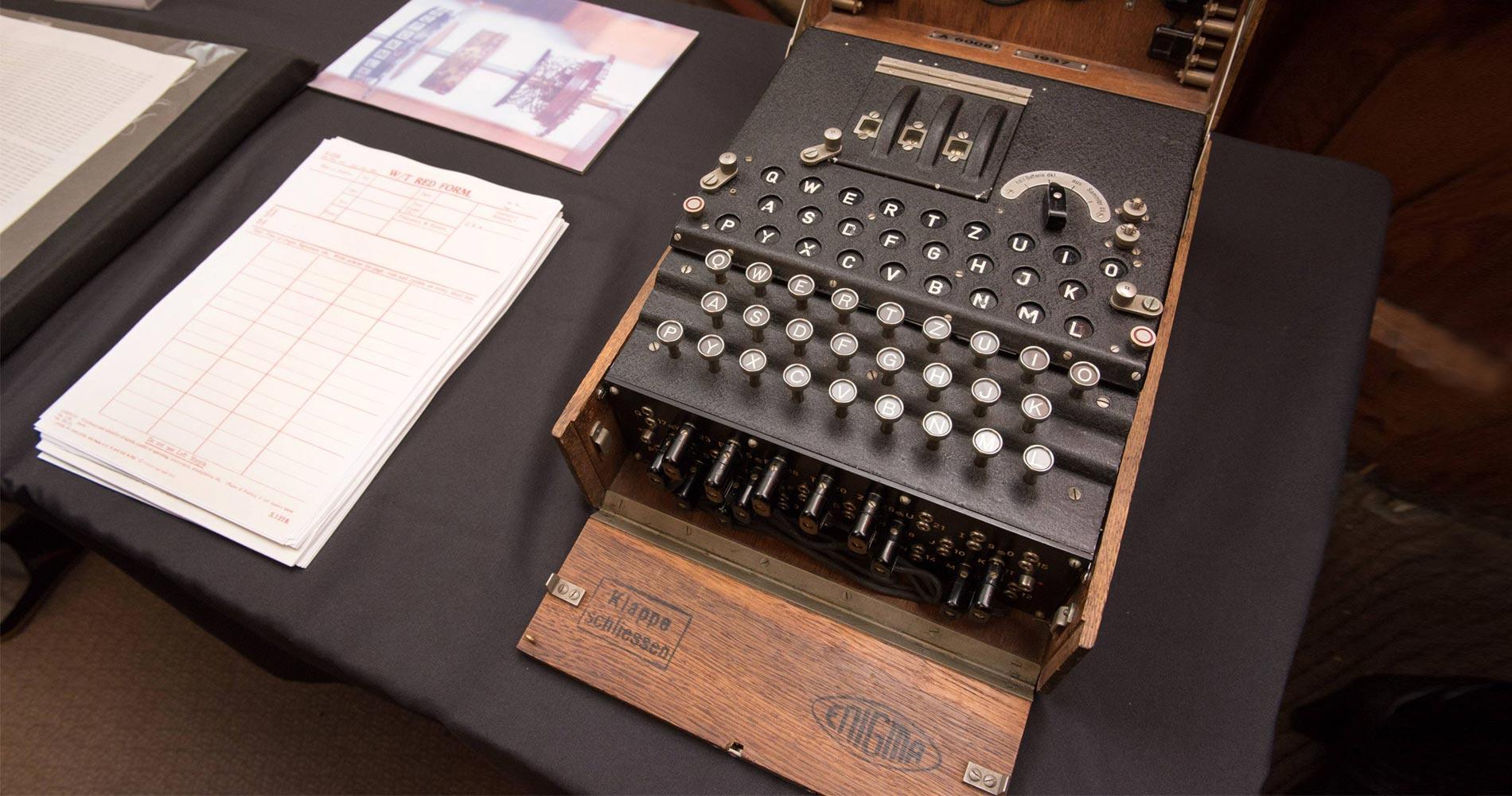 Bletchley Park, located in Buckinghamshire in the United Kingdom is relatively unknown, and for good reason. This was the top-secret base for the Government Code and Cypher School during the Second World War, and the location of a group of highly intelligent people who broke the Axis countries’ ciphers and the Enigma Code. It now is becoming renowned as a vibrant museum that showcases the austere but important lives of these critical people, whose work not only shortened the war by 2 years, but paved the way for modern computing which has propelled global advancement.

For those who have not seen the 2014 film “The Imitation Game” or the earlier (2001) film “Enigma”, the name Bletchley Park may still be a mystery. And during the Second World War, that was how it was intended to be. “The Intelligence Factory” exhibition at Bletchley Park opens up the world and achievements of the Enigma code-breakers.

An unprepossessing set of buildings in a remote part of Buckinghamshire in the English countryside was, at that time, actually home to over 9000 people who were eventually credited as being collectively responsible for shortening the war by two years and saving tens of thousands of lives. Yet very few knew about it. It has now been transformed into a vibrant museum bringing this best-kept secret into the open.

In 1938, as the likelihood of a war in Europe was growing, UK government departments were looking to relocate outside London away from potential air raids. Bletchley Park was bought by the Government Code and Cypher School (GC&CS), purchased by Admiral Sir Hugh Sinclair, then Chief of the Secret Intelligence Service, in his own name to conceal the real purpose. A manor house that had been built in the 1800’s surrounded by over 50 acres of land provided GC&CS (the forerunner of the GCHQ) space to house an increasing number of personnel dedicated to breaking the coded messages of the Axis powers.

The renowned mathematician Alan Turing was on the staff of the GC&CS and worked at Bletchley Park. He is considered the father of theoretical computer science and artificial intelligence and played a key role in deciphering the Enigma code.

The German army possessed a coding-machine known as Enigma. It was essentially a box of rotors and wires which transformed messages into a totally different set of letters that would read as complete gibberish. In standard coding, one simply decided on how to exchange each of the 26 letters for a different letter. And there were machines which could do this – each time one typed an “A” for example, it would come out as a “T”. What made the Enigma machine so special was the fact that when an operator was encoding a message, every time a letter was pressed, the movable parts of the machine would change position so that the next time the same letter was pressed it would most likely be enciphered as something different.

The Allied powers understood the workings of the Enigma machine but, even if they captured a functioning German Enigma machine, they could not decode for longer than a day. Each day at midnight the Axis powers reconfigured the sets of rotors and wires inside their machines so that every day there was a completely new code which needed to be broken.

So where does one start when looking at a whole string of seemingly random letters that have been coded in one of 150 000 000 000­ 000 ways? Some messages would contain standard phrases, e.g., a weather report would undoubtedly have the word “weather” in it more than once. Some Axis operators might always end a message with “Heil Hitler”, or use the name of their girlfriend. Looking for clues like this would help codebreakers “crib” part of a message.

“Cribbing”, as it was known, gave them some of the letters, but still millions of potential combinations remained, so potentially cribbed messages were then fed into gigantic machines known as “Bombe”, the precursors of our computers. The machines would then, eventually, identify what each letter had been transformed into, and therefore identify how the Enigma had been encoded that day. Once the code was broken, the messages from that day could be interpreted. But the process took hours and at midnight, when the Axis powers reconfigured their machines, everything had to start again. Alan Turing and fellow code-breaker Gordon Welchman invented the Bombe machine.

The interpreted messages might contain vital information about new commanders, forces, locations of enemy aircraft and ships. However, if the Allied powers acted immediately on every decoded message, the Axis countries would soon realize that the codes generated by the Enigma machines were being broken. So the Enigma code-breakers employed alternative means of corroboration designed to fool the enemy into thinking that a successful attack was simply luck. If they discovered the location of an enemy boat, this would be verified by an Allied reconnaissance plane which the enemy was intended to spot – and an Allied warship would then be sent to destroy the boat.

Since the Allied powers were also sending messages with fake information, the Bletchley Park code-breakers were also looking for indications that these false messages had been decoded and believed. This aspect played a critical part in enabling the Allied powers to carry out their successful 1944 D-Day landing in Normandy on the northern coast of France. The Axis forces had been convinced the invasion would take place in a completely differently location.

Once the war started, Bletchley’s initial cohort of code-breakers expanded to become what was known as an ‘intelligence factory’. This is the name of their newest exhibition, designed to highlight how those 9000 people had lived and worked. In keeping with the desire to reduce unwanted attention, apart from the manor house at its centre, Bletchley Park is simply a series of low, austere huts, dimly lit with tiny windows and very basic furniture. Messages were sent around the buildings via canisters in tubes along the walls and ceilings. Walking around the rooms and corridors there is a sense of sobriety and seriousness. By today’s workplace standards it would be condemned as joyless and unsuitably uncomfortable. But this was not a place for people who only function best in comfort. The work was frequently boring, repetitive, and frustrating, and GC&CS sought people who had the personal resilience to cope with that and strong motivation to fight and win the World War in general.

People who worked there were a unique mix of academics, mathematicians, linguists, military staff, clerks, engineers and cleaners. GC&CS trawled universities looking for talented thinkers. JRR Tolkien was on the list of potential recruits, but ultimately was never selected. Talent was everything; societal norms were unimportant. Three-quarters of the employees were women. Perceived eccentricity was irrelevant. In today’s society the acceptance of neurodiversity is being debated. 80 years ago in Bletchley Park there were people who had been recruited specifically because of their ability to think differently.

Necessity is the mother of invention. The technology and ideas that went into the development of the code-breaking machines ultimately led to the creation of modern computers. Bletchley Park was home to the world’s first programmable computer, known as Colossus.

Yet when the war was over, because of the continued need for secrecy, papers were burned and machines dismantled. Turning Bletchley Park into a museum must therefore have been a challenge, including finding items that could be brought back in order to demonstrate how people lived. There are examples of the machines, the furniture, the war-time posters which would have constantly reminded people of the need for secrecy and discretion with their work, but it is not crowded with exhibits.

While it is fascinating to see the reconstructed machines, the “Intelligence Factory” very cleverly demonstrates that without the physical “cribbing” to begin the cracking of the code, and without the intuition to then determine the action needed to be taken after a message was decoded, they would never have succeeded. The human intelligence factor is deftly highlighted.

The exhibition focusses on helping the visitor to experience the actual work of decoding, interpreting and actioning messages. There are interactive touchscreen walls and tables where the visitor is set a series of challenges that ultimately demonstrate the essence of Bletchley Park. It was quite simply a place where phenomenally clever and motivated people, often operating with nothing more than their intelligence, intuition and a pencil and paper, ultimately saved thousands of lives.