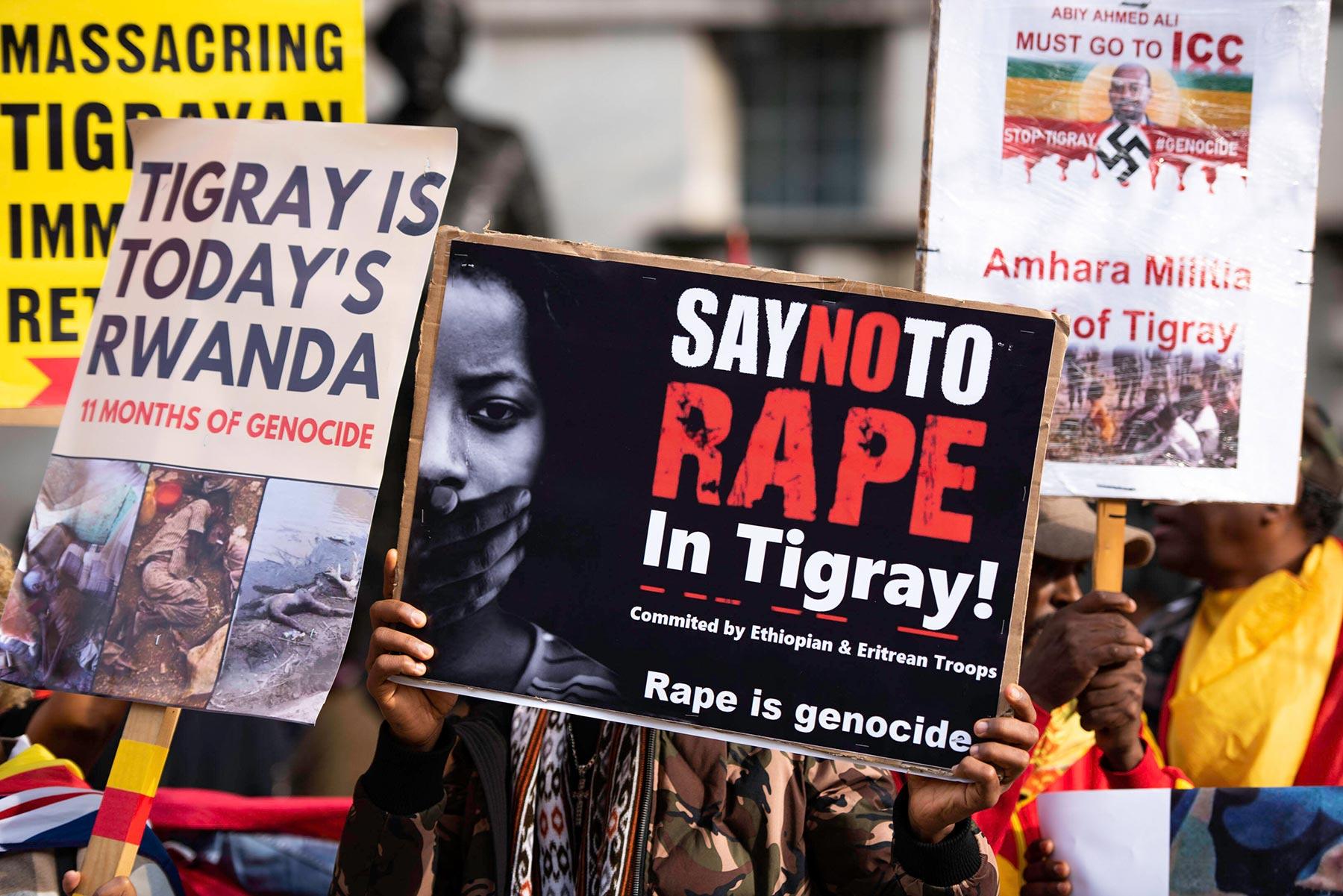 While the media has been largely barred from Ethiopia and prevented from documenting the ongoing civil war, a new report presents evidence of sexual violence, ethnic cleansing, and other atrocities.

Although Ethiopia has severely restricted access to journalists and is enforcing a communications blackout – which has made it difficult to determine the extent of the violence in Tigray – Amnesty International and Human Rights Watch recently released a 207-page joint report in April 2022 that reveals sexual violence and an ethnic cleansing campaign against Tigrayans.

After federal Ethiopian soldiers, along with Eritrean soldiers and Amhara security forces, took control of western Tigray, the new authorities banned the Tigrinya language and implemented policies designed to force Tigrayans to flee, such as distributing leaflets with an ultimatum to leave or be killed.

The story of one survivor in the report describes the massacre of dozens of Tigrayan men in January of 2021, which prompted many to flee the region. Militiamen rounded up 60 Tigrayan men in the town of Adi Goshu, lined them up in rows at the Tekeze River, and shot them.

Over the past 16 months, hundreds of women have stated that they have suffered horrendous acts of sexual violence at the hands of Ethiopian and allied Eritrean soldiers. In April 2021, Aljazeera reported that a 27-year-old woman was kidnapped off a bus in Tigray and imprisoned for 11 days during which she was repeatedly raped by 23 soldiers who forced stones and metal nails into her vagina.

Significantly, Dr. Fasika Amedelassie, the top government public health official, reported that many other women have similar reports of being held captive as sex slaves for days and even weeks by Ethiopian government soldiers or Eritrean troops. Dr. Amedelassie’s assertion was the first time an Ethiopian official has referred to sexual slavery in the context of the conflict in Tigray.

Since the civil war began in Ethiopia in November 2020, almost half a million people in Tigray have died from fighting or from starvation, with reports of destroyed refugee camps, mass detention, torture, looting, sexual violence, massacres, forced expulsion, extrajudicial killings and denial of humanitarian aid. Refugees have been streaming into Sudan over the past 17 months in what the United Nations calls the most extreme refugee crisis Ethiopia has seen in 20 years.

Ethiopian Prime Minister Abiy Ahmed at first denied Eritrea’s involvement in the conflict and that civilians were being hurt. Evidence from human rights groups and news outlets have provided conclusive evidence to the contrary. While Eritrea continues to deny any involvement, Ethiopia has promised that those who have committed any wrongdoing will be held accountable.

The outbreak of the war also significantly exacerbated Ethiopia’s food insecurity situation. The fighting began during the fall harvest after an invasion of desert locusts attacked and damaged significant portions of the crop. In September of 2021, UN Humanitarian Affairs and Emergency Relief Coordinator Martin Griffiths alleged that the region was experiencing a “man-made” famine after the international organization’s access to deliver humanitarian relief to more than 5 million people in need in Tigray was limited. In the wake of Griffiths’s accusation, Ethiopia denied that it was blocking aid and expelled seven senior UN officers from the country, including several who had been organizing aid efforts.

Ethiopia, a country with 112 million people and over 80 ethnic groups, has long been plagued by division. The country comprises ten regions with significant autonomy that are divided along ethnic lines.

When Prime Minister Abiy Ahmed was appointed in 2018, there was hope that the young and charismatic politician would be able to heal the divide and unite the country. Now, Ethiopia is embroiled in a civil war that has seen ethnic violence, rape as a weapon of war, and other atrocities committed on both sides.

Prior to the civil war, Prime Minister Abiy won the 2019 Nobel Peace Prize for successfully ending 20 years of conflict with neighboring Eritrea. However, peacemaking with Eritrea incensed the opposition Tigray People’s Liberation Front (TPLF) of the Tigray region in northern Ethiopia, which has had prolonged tensions with Eritrea and previously governed Ethiopia in an authoritarian manner for decades. When the prime minister postponed the scheduled 2020 parliamentary elections as a result of COVID-19, the TPLF held their own regional elections and won. In response to this act of defiance by Tigray, Abiy stated that the elections were invalid, and Ethiopian lawmakers voted to cut funding to Tigray. This only further enraged TPLF leadership and sparked a series of escalations between the regional and federal governments.

In November of 2020, the war began when Abiy, with the military backing of Eritrea, ordered a military offensive against the TPLF after accusing the group of attacking a federal army base to steal weapons outside of Tigray’s regional capital Mekelle. Although the war has not ended, after 16 months of brutal conflict, the Ethiopian government and the Tigray Defense Forces reached a ceasefire in March of 2022 that allowed humanitarian aid into Tigray for the first time in months. While this is a productive step to alleviating some of the hardship the war has imposed on the Ethiopian people, leadership on both sides must work to reach a lasting peace as well as cooperate with the international community to hold those who committed atrocities accountable.

Picture: October 19, 2021, London, United Kingdom: Protesters hold signs during the Tigray Genocide Protest near 10 Downing Street in London. Protesters staged a protest against what they call a genocidal war by Ethiopia and Eritrea on the region of Tigray, and called on the UK and the international community to help the people of Tigray. © IMAGO / ZUMA Wire