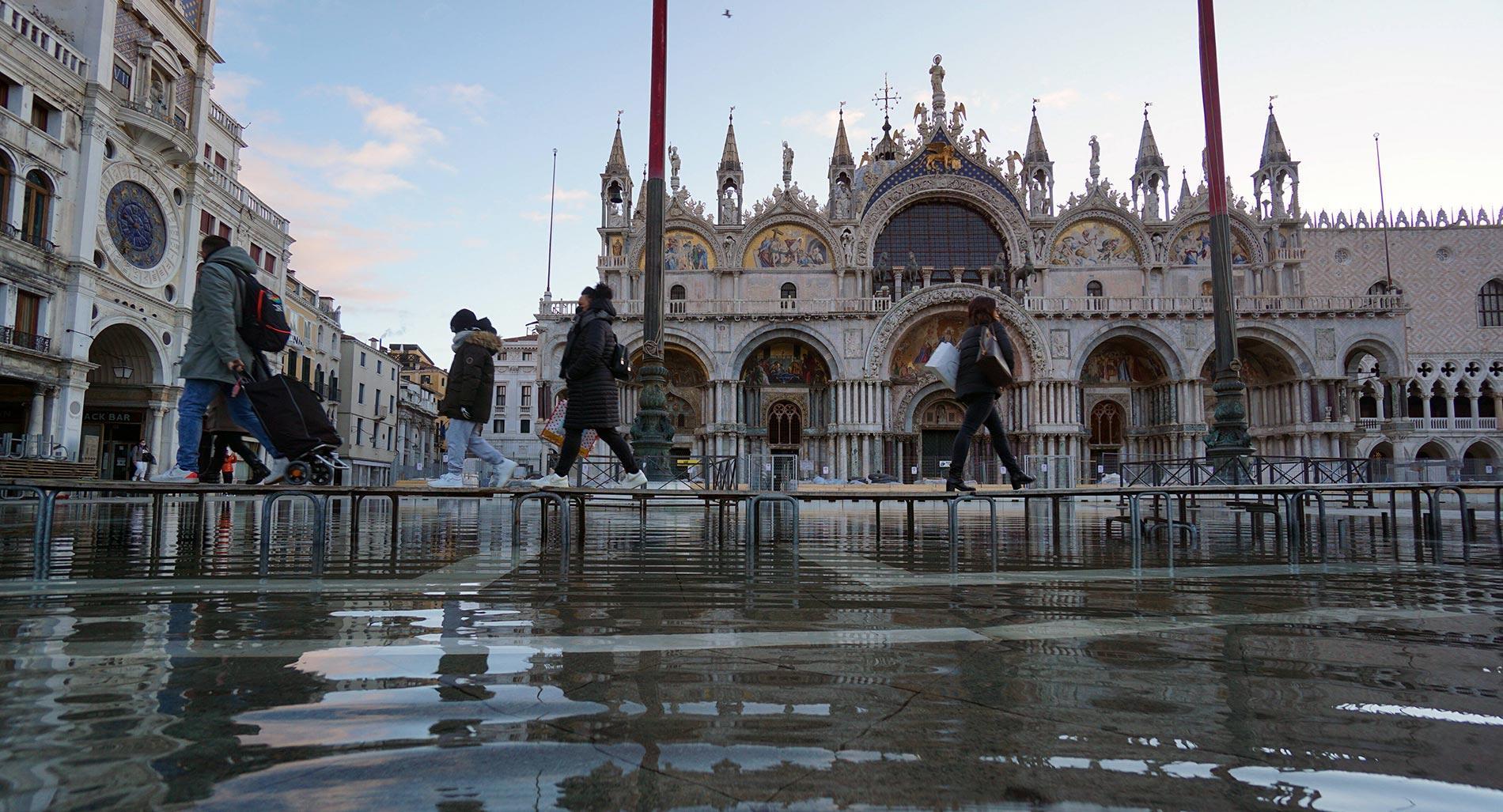 Venice won’t go down – the landmark USD 6 billion engineering project “Mose” prevents sea water from flooding the lagoons of Italy’s iconic medieval city, subsequentially ending its famous “acqua alta”. As water levels continue to rise also due to climate change, is the Mose a long-term solution in the constant battle against the sea?

The so-called Mose has been operated 13 times to prevent high water from entering the lagoon and flooding the historic centers of Venice and Chioggia since becoming operational on 1 November 2021. However, the flood barrier had its first real “stress test” in November 2022 when all 78 of the Mose dams were raised to save the city from flooding. With the water level reaching over 1.7 meters the normal level, an estimated 82% of the canal city’s walkways would have been under water without the protective floodgates – an unprecedented success in preserving the city`s landmarks and daily life.

Transport and Infrastructure Minister Matteo Salvini: “Mose was facing the highest tide in 50 years. Without those barriers Venice would be submerged in a catastrophic way. Despite the nay-sayers those barriers are saving a heritage of humanity”.

The Mose system is located at the inlets of Venice’s famous Lido, Malamocco, and Chioggia, the three inlets of the coastal cordon through which the tide spreads from the Adriatic sea into the Venetian Lagoon. When not in use, the Mose floodgates are full of water and lie completely flat. In the instances of an exceptionally high tide, hazard compressed air is introduced into the sluices, which empties the water and forces the flood gates to rise. They block the flow of the incoming tide into the lagoon. The sluice gates remain in use only for the duration of the high-water event – when the tide recedes, and the lagoon and the sea levels are back to normal, the sluice gates are again filled with water and return into their flat resting position.

Mose is projected to protect Venice and the lagoon from tides up to three meters high and from a rise in sea level up to 60 centimeters in the next 100 years. “50 years, 100 years — somewhere between those two dates,” says Pierpaolo Campostrini, Managing Director of Corila, of a research consortium that studies the Venetian lagoon. “That means the Mose is useful. But we know it’s temporary.”

The system is facing criticism by environmental groups who claim that the blockade of water has the potential to negatively impact the complex biodiversity and eco-system of the lagoons. They state that the required regular maintenance every five years and extraordinary maintenance every 15 years, which includes washing, painting and fixing any damaged structural steel work, will exacerbate this negative impact.

After much delay, construction of the mega-engineering venture began in 2003. The project was expected to be fully completed by 2014, but was delayed because of corruption scandals. A 2014 investigation led to a wave of arrests and personnel changes. Even now, the venture is not technically finished. It has been operating for two years in experimental mode as engineers complete the last backup systems. The project is expected to be officially completed in 2023.

When the Mose is fully operational next year, the barriers will be raised when the water level hits 110 centimeters above the regular level. It is expected to protect around 86% of Venice, including most residential areas. According to engineer and site director Alessandro Soru, the barriers will be raised when it looks like the tide will hit 100 centimeters, to account for wind and rain raising the water levels even more.

The big question yet remains: how will the Mose hold up to climate change?

After the flood of December 2020, Claudio Vernier, President of the Associazione Piazza San Marco, which represents business owners in St. Markus’ Square, told CNN that when the Mose was initially planned, it was estimated that it would hit 110 centimeters only couple of times a year. “Now with the worsening climate crisis, the water level is always higher, and we see that kind of tide level 20 times a year, so what will happen in 30 years?”.

“If in 100 years the barriers aren’t enough, and we can’t hold off three meter tides, I can tell you the problem won’t be Venice”, underlined Moses’s High Commissioner Elisabetta Spitz. “But above all we need to find a point of mediation between economic needs – of those who operate in the lagoon – and the need to protect. That’s the big question we’ll need to take forward down the line.” Spitz took office in 2019, well after the corruption trials of the Mose. “I know there were scandals, I’ve read about them, and it’s right that they’re stigmatized and the people who did it were punished,” she said. “But despite everything that happened, I say, long live the Mose. Because it protects Venice.”

Georg Umgiesser, director of the Italian national research council CNR-Ismar, argued that he anticipates that Venice will be eventually forced into a cruder method to block the sea – a permanent wall. He however adds that “nobody wants to hear about this idea right now.” Maybe, he continues, some yet-unknown technology can stave off what he feels is unavoidable. “The Mose certainly buys us time”.

Despite the controversy, most Venetians agree that Mose is helping greatly to protect their beloved city – hopefully for many decades to come.