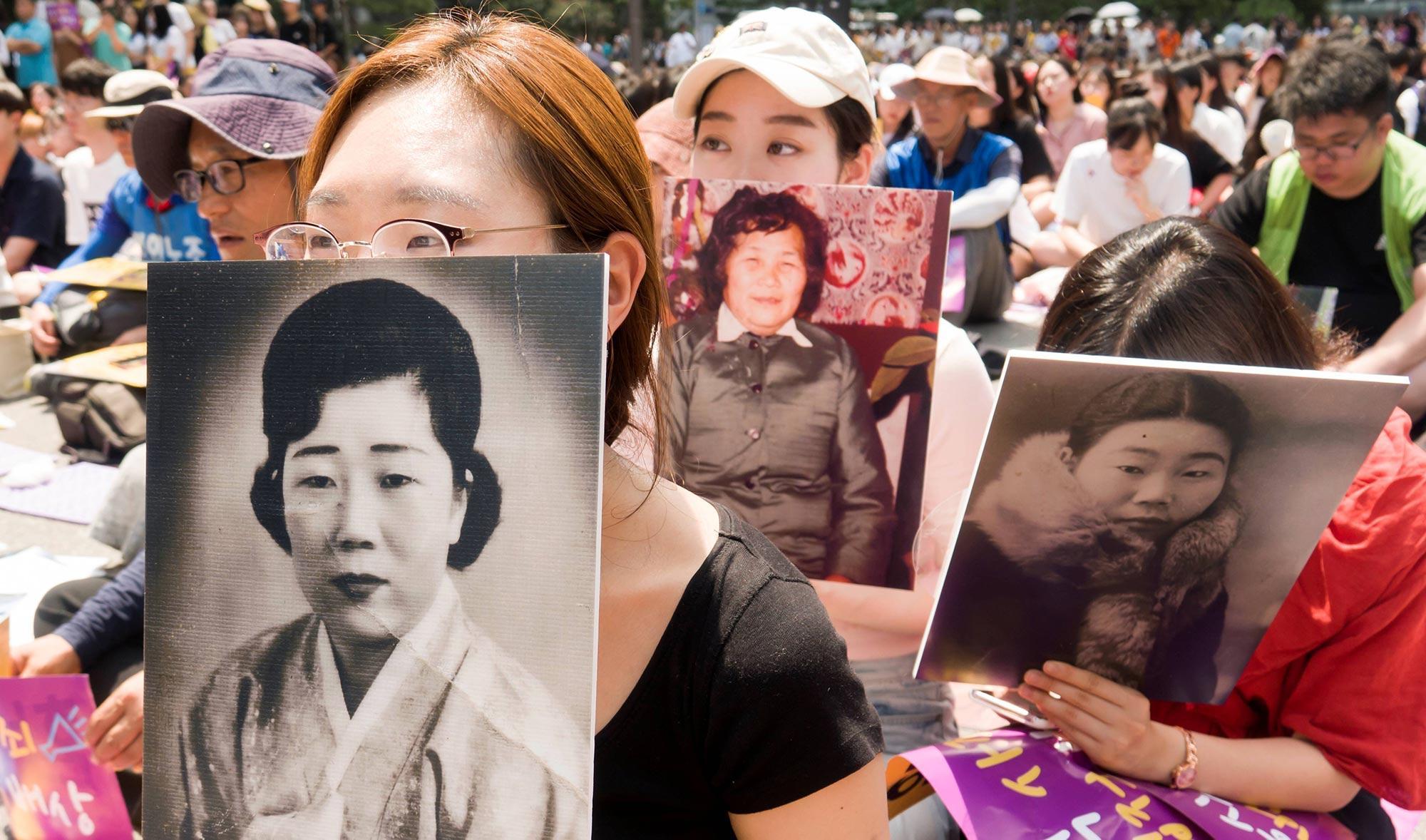 Korea’s remaining comfort women continue the world’s longest-running protest against their enslavement as sex workers during World War II. Japan has refused to apologize officially for these war crimes. Protests will continue as the baton is passed to the next generation. This injustice will not die with the last comfort women.

January 2022 is the sad 30-year anniversary of the protest against Japan’s inhumane military brothels and enslavement of the Korean comfort women. Since January 1992 the first protesters gathered in front of the former Japanese Embassy in Seoul, Republic of Korea, to make a stand against Japan’s military sex slavery before and during World War II. This ongoing protest has taken place over 1 500 times, on each Wednesday in support of Korea’s comfort women. It is the world’s longest ongoing protest. Despite wide support in Korea, Japan has not apologized for this crime.

Comfort women and their supporters have called on the Japanese government to apologize officially to the Korean victims forced into sexual servitude. As the number of survivors is dwindling rapidly, the movement has gained support from younger generations. Japan will not be able to sit this one out. Moreover, anti-Japanese sentiment increases worldwide the longer Japan ignores the demands of the comfort women and their supporters. Japan’s reaction to this longest-running protest is also a barometer for Korean-Japanese relations.

The Korean Council (a Korean NGO advocating for comfort women’s rights) has had a leading role in organizing and supporting these demonstrations, which also focus on the passive and evasive position of successive South Korean governments, which also contributed to this issue’s remaining unresolved. The focus of the Korean Council has been to raise awareness of the comfort women through these weekly demonstrations and to gather broad support from other civic groups, politicians, religious and labor groups to host, sponsor, and attend these events, thus extending this movement indefinitely. The protests take place not only in Seoul, 20% of these protests being held outside of the capital.

Official Japanese military brothels existed since 1932. After the now infamous Rape of Nanking on 13 December 1937, where up to 80 000 Chinese women were raped and many brutally killed, the Japanese military brothel system was expanded. Japanese Emperor Hirohito condemned the Nanking mass rapes and its negative effect on Japan’s image. The historian Carmen M. Agibay noted that many more ‘comfort stations’ were established to prevent further such atrocities, give Japanese military personnel an outlet to satisfy their sexual needs with an isolated group of prostitutes and reduce sexually transmitted diseases.  Before military battles, the abuse and rape at the comfort stations increased.

In 2007, the Associated Press disclosed that the comfort stations did not end with the end of the war. They were allowed to ‘operate’ and service Americans. General Douglas MacArthur put an end to this practice in 1946.

Comfort women or comfort girls were forced into sexual slavery by the Imperial Japanese Army in occupied countries and territories before and during World War II.  The word “comfort women” is taken from the Japanese word ianfu (慰安婦), a name given to prostitutes in Japan. It is unclear exactly how many women were forced into sexual slavery. As many as 200 000 could have been subject to this horrible practice from all occupied and dependent territories including Korea, China, the Philippines, Burma, Thailand, Vietnam, Malaya, Manchukuo and Taiwan, the Dutch East Indies, Portuguese Timor and New Guinea. Stations were located in Japan, China, the Philippines, Indonesia, Malaya, Thailand, Burma, New Guinea, Hong Kong, Macau, and French Indochina. Around 200 to 400 European women were also enslaved including Dutch and Australian women.

This ‘sex industry’ preyed off lies, torture and rape. Women and girls were forcibly abducted from their homes, lured away by unscrupulous middlemen with the promise of work in factories, nursing and restaurants, or purchased from their parents as indentured servants, only to be forced into prostitution.

Comfort women were not only subjected to daily repeated and constant rape, but lived in inhumane filthy conditions. The brothels were called “public toilets” by the Japanese. Though each of the comfort women had her own sad story, all narratives shared some things in common: forced sex slavery, repeated rapes, violence, unwanted pregnancies and sexually transmitted disease. Their life was one continuous nightmare.

These brothels were initiated by the Imperial Japanese Army to reduce rape and anti-Japanese sentiment in the occupied territories. Yet the opposite effect took place at the time. Japanese historian Yoshiaki Yoshimi has proven that comfort stations actually did not reduce rape and did increase the spread of venereal disease. The hatred for the Japanese occupying forces continued to rise.

While mostly right-wing revisionist counter-protests against the comfort women continue, mainstream sentiment in Korea and around the globe strongly supports the comfort women and their demand for an official apology for what the Japanese military did to them. The systematic rape of women is genocide and act of war.

By not officially apologizing for the policy of forcing women and girls into sex slavery, Japan has not adequately and humanely dealt with the atrocities committed during World War II.  War criminals have remained unpunished and the collective consciousness of Japan has not accepted that it committed great injustices during World War II. Another example of this are the pilgrimages of various top Japanese politicians to the Yasukuni Shrine honoring Japanese war criminals.

Japan should thus be held accountable for the systematic enslavement of hundreds of thousands of women. The international community should not look the other way just because Japan is now an ally of the West. As long as Japan ignores its moral responsibility, protests will continue. Worldwide solidarity is growing. Similar to the wave of support after the terror attack on Charlie Hebdo with the slogan “Je suis Charlie” – we must all say we are the comfort women and we stand by you.

Picture: Protest over Japanese military sexual slavery, Aug 15, 2018. People hold portraits of the late comfort women or sex slaves by Japanese military during the Second World War at the Wednesday Rally against Japanese government to demand official apology and full compensation from Tokyo, in front of the Japanese embassy in Seoul, South Korea. © IMAGO / AFLO