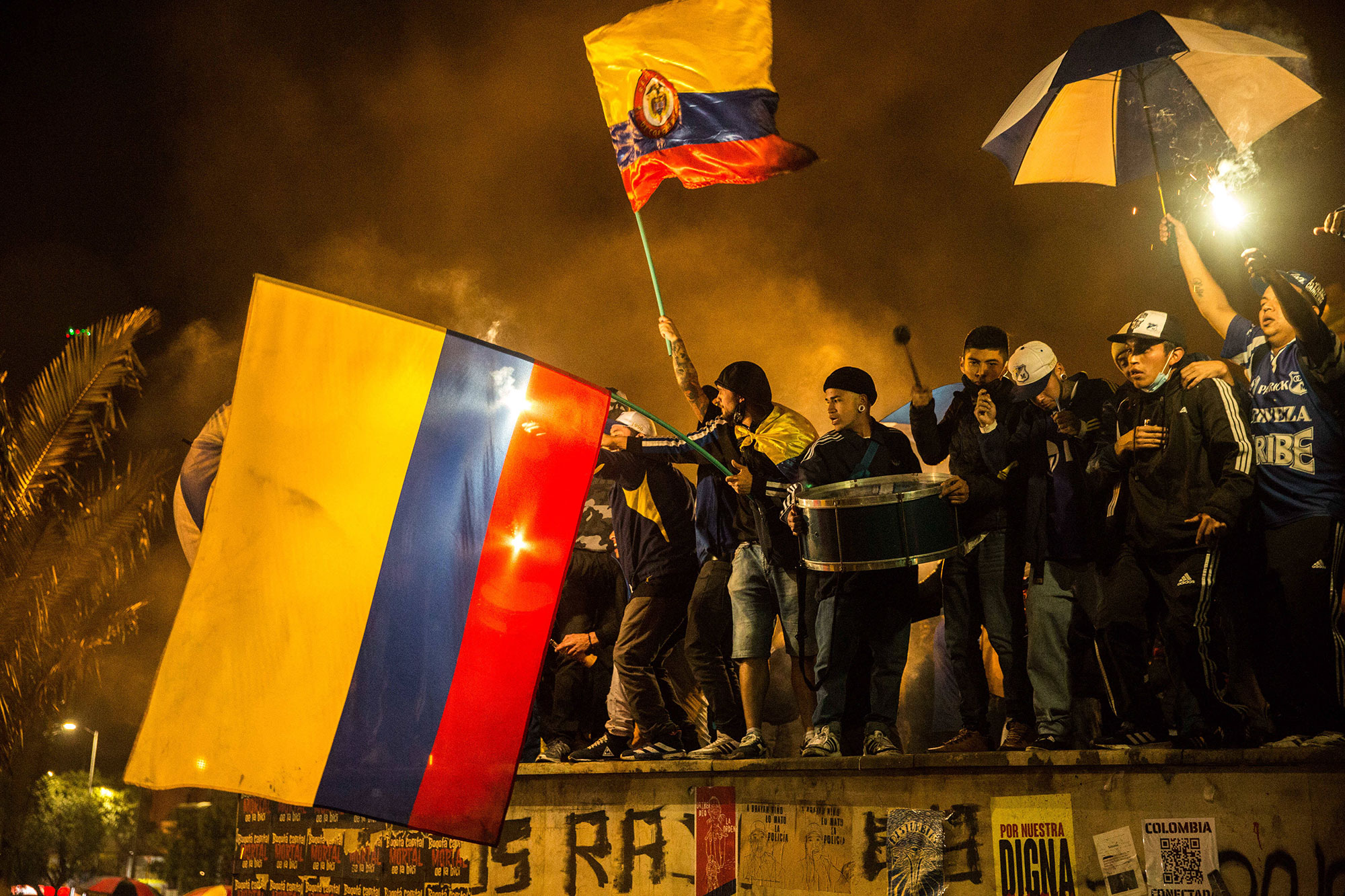 Rioting For Reform In Columbia

At the end of April 2021, a series of protests began in Colombia after the government proposed a new tax reform. Following the public outcry that ensued, the government retracted its tax reform proposal, but large groups of people continued to protest over major long-standing issues.

On 30 May, the UN High Commissioner for Human Rights, Michelle Bachelet, urged those involved in the ongoing national strike in Colombia to reduce hostilities and attempt to resolve their indifferences by way of dialogue. This came following what was seen by the High Commissioner as a deeply concerning development in the ongoing protests in Columbia. A UN estimate stated that between 28 and 30 May, fourteen people were killed and nearly one hundred injured during confrontations between police and protestors. A significant percentage of the deaths and injuries were caused by law enforcement officers’ use of firearms.

Also on 30 May, thousands of counter-protestors marched through the capital Bogota, calling for an end to the protests which started at the end of April. The month of protests caused significant economic problems. The BBC reported that protestors had set up roadblocks causing food and supply shortages in parts of the country, which among other things prevented the transport of Columbia’s main export oil, coal and coffee. After a month of violence and unrest throughout the country, many Colombians are understandably ready for a settlement to be reached between the protestors and the government, yet the protests are undoubtedly symptomatic of several deep-rooted issues for which there is no quick solution.

Initially, the Colombian protests started in response to a proposed tax reform presented by President Iván Duque Márquez’s government. The reform was meant to improve the country’s social safety net and extend permanently the basic income support program which was implemented to help the population through the economic difficulties of the COVID-19 pandemic. This reform, if implemented, would have increased taxes for middle-income Colombians who were already struggling economically with the additional challenges of the pandemic. Essentially, many believed that implementing the proposed reform would do more to increase the number of low-income earners than to improve the conditions of the general population, hence, protests erupted.

Although the government rather swiftly withdrew the proposed tax reform, and the finance minister Alberto Carrasquilla resigned over the matter, the protests did not die down. Rather, they evolved into anti-government protests and calls for an actual universal basic income scheme, a reform to the higher education system in the country and a reform of the police. The latter of these calls has only grown stronger due to the violent confrontations between police and protestors which have caused significant numbers of deaths and injuries.

In many ways, the current protests in Colombia can be seen as a continuation of a series of anti-government protests from November 2019. A group called the National Strike Committee organized these protests in which some 200,000 people participated. These protests were organized to denounce government corruption and planned pension and tax reforms among other issues. The National Strike Committee is also responsible for organizing the current protests, and many of the main issues from 2019 are still prevalent, although the protests have taken on a whole new dimension due to the additional challenges of the pandemic.

It was essentially the additional challenges of the pandemic that escalated the protests this time around. Protests broke out despite mass gatherings being prohibited in order to prevent the spread of COVID-19. This in turn led to riot police responding harshly in order to disperse the crowds. Excessive use of force by police officers has on several occasions over the last few years led to the death of protestors. The aggressiveness of the police undoubtedly increased tension, and the calls for police reform became an increasingly central rallying cry.

Other central causes for the protests are Colombia’s high level of inequality and poverty, and Colombians’ being unable to improve their quality of life. There is a significant lack of social mobility in the country, which largely stems from inaccessible higher education, high poverty rates and high levels of unemployment.

These deep-rooted issues clearly cause large portions of the Colombian population to be overcome with anger and frustration over the levels of injustice and inequality in the country. However, as negotiations between protestors and the government progress, and ideas of basic income schemes and reforms to higher education and the police system are discussed, a beacon of hope for a peaceful and beneficial settlement appears. On 6 June, the Columbian government announced plans to request that the Congress would approve some reform to the police, including improved human rights training and oversight of officers. It might seem that a solution, or at the very least the beginning of a solution to the many social and economic issues faced by most Colombians is closer than ever.

Picture: May 28, 2021, Bogota Cundinamarca, Colombia: A group of protesters singing and shouting anti-government messages during the demonstration. On the 28th of May, a month after the national strike first began, protesters, continue to demonstrate on the streets of Bogota and all over the country to oppose government policies. At the capital city, multiple demonstrations and marches took places during the day, with thousands of people participating in the strike. At Plaza de Los Heroes (Heros Square), one of the concentration points in Bogota, more than 4.000 people gathered. Events such as concerts, performances and speeches create a cultural and artistic ambient till the evening. Around 11 pm, National Police and ESMAD (Anti-riot Squadron) arrived. © IMAGO / ZUMA Wire

Other Articles Which Might Interest You
Pan Y Paz: The Socio-Economic Implications Of COVID-19 In Latin America And The Caribbean